Amanda Milling was elected as Member of Parliament for Cannock Chase in the 2015 and 2017 General Election's.

Amanda studied Economics and Statistics at University College London, after which Amanda built up a successful career in market research, specialising for a large part in the financial services sector. Before entering Parliament, Amanda was Director and Head of Clients at Optimisa Research.  In 2009 Amanda became a local Conservative Councillor and was a campaign organiser for several local and national elections.

Since being elected to Parliament, Amanda has served on the Business, Innovation and Skills Select Committee as well as the Committee for Arms Export Controls and the Education, Skills and Economy Sub-Committee.  As part of these committees Amanda has served on some high profile inquiries, including those looking at the working practices at Sports Direct and the collapse of BHS.

In Parliament Amanda’s main areas of interest were education and young people (including career advice, apprenticeships and higher education); collaboration between blue light services and business & enterprise (with a particular focus on trade & exports).

Locally, Amanda has been an active campaigner relating to all the issues that have come about from the closure of the Rugeley B Power Station; the delivery of the Chase Line electrification project and supporting young people into work.

Amanda supports a wide variety of local groups, organisations and local charities including the Royal British Legion, the Rotary Clubs, the Lions Clubs and Soroptimists, Newlife Foundation for Disabled Children and the Hibbs Lupus Trust – to name a few!

Amanda was born in Burton upon Trent and brought up in a nearby Staffordshire village.  She now lives in Brereton. Living in Cannock Chase means that Amanda is always out and about in Cannock, Hednesford, Rugeley and our villages attending events as well as visiting residents and businesses.

Keep up to date with Amanda’s work both locally and in Parliament by following her on Facebook at fb.com/amanda.milling.

Amanda Milling was elected as the Member of Parliament for Cannock Chase in the 2015 and 2017 General Election's.

Amanda Milling MP is calling on schools and organisations in Cannock Chase to take part in UK Parliament Week, an annual programme of events to connect people with the UK Parliament.

Amanda Milling MP, Member of Parliament for Cannock Chase, is calling on local residents to support Staffordshire Regimental Mascot, Sgt Watchman V, in the Westminster Dog of the Year competition. 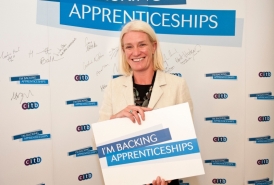